We hypothesize that beta-blockers, which perturb the β-adrenergic axis, can boost the standard of treatment; thereby turning prostate cancer into a chronic disease at a reasonable cost, both for the patient and the health care providers.

We were the first to show that use of beta-blockers is associated with reduced prostate cancer specific mortality using data from the Cancer Registry of Norway, The Cause of Death Registry and the Norwegian Prescription Database. Our focus is now to determine the potential of beta-blockers to improve therapy response using epidemiological data and various pre-clinical models. The effects of adrenergic signalling on cancer cells and the tumour microenvironmen will be unravelled. This will give us knowledge about whether, when and why beta-blockers have a positive effect on therapy response.

Based on analysis of patient data and preclinical mechanism studies described in this project, we will with high probability be able to predict which patient group will be most likely to benefit from beta-blockers and which treatment regimen that should be initially tested. This will lay the foundation for a clinical trial.

We suggest that by complementing the toolbox with beta-blockers s, we will be able to prolong therapy responses and thereby transform lethal prostate cancer into a chronic disease in a subgroup of patients.

The concept of repurposing out-of-patent drugs for treatment of cancer is a desirable approach. By this approach, time and money are saved during development, the cost of use is low, and there is a pile of safety data that have been collected over many years. 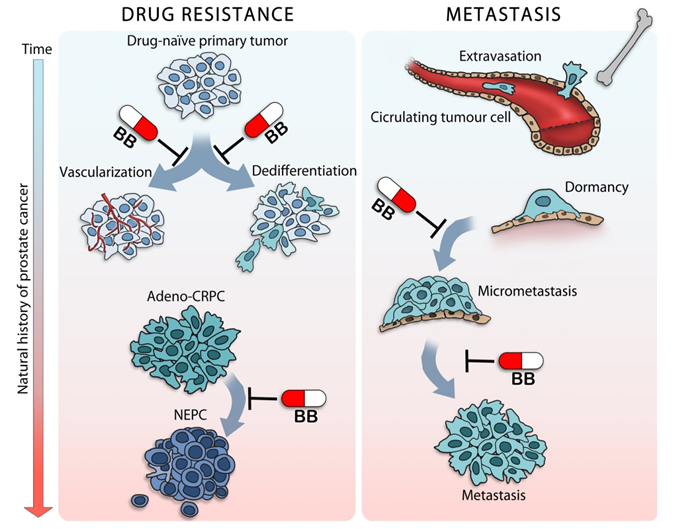 Future plans:
Validate the results using data from the Radical Prostatectomy Registry at Oslo University Hospital.
Evaluate the possibility for a pilot RCT.