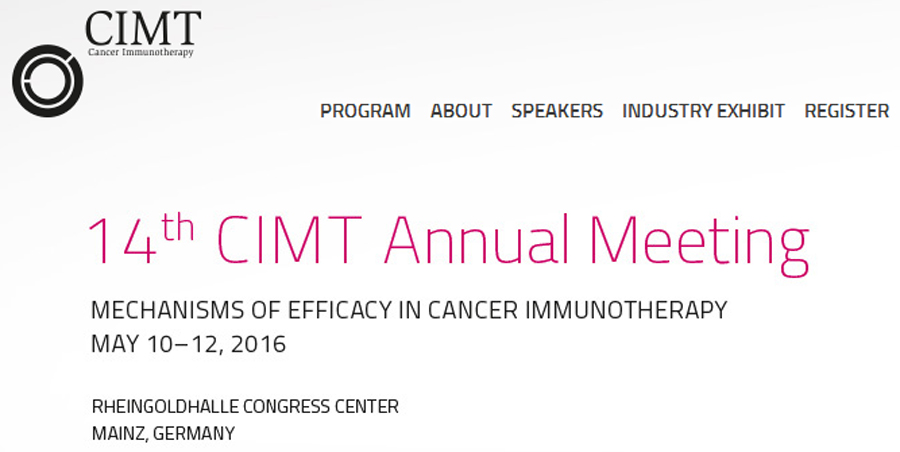 at the CIMT Endeavour May 11 (9:00): From Science to Products - Change of Perspectives

Adoptive immunotherapy with a little help from CD4 T cells

T-cell based immunotherapy is an attractive treatment for advanced cancer. Although the critical role of CD4 T-cell help in tumour elimination is well established, the focus of T-cell receptor (TCRs) transfer has largely exploited HLA class I-restricted molecules. The importance of CD4 T-cell responses against tumour neoantigens, in addition to their role in priming and maintenance of CD8 T cell responses, has also recently been emphasized. We have identified and cloned several HLA class II-restricted CD4+ T cells isolated from patients who have clinically benefitted from vaccination with long peptides or dendritic cells targeting antigens such as hTERT, survivin and frameshift mutated TGFβRII. In these patients strong T-cell responses against peptides other than those used for vaccination were detected, suggesting epitope spreading. We validated these HLA-DR and -DQ restricted T-cell clones and showed their ability to recognise target cells loaded with long antigenic peptides at low concentrations and, if available, direct tumour cell recognition. We further isolated the TCR coding sequences and used mRNA electroporation for TCR redirection of expanded T cells. Both CD8+ and CD4+ T cells expressing the TCRs produced TNF-α, IFN-γ and degranulated (CD107a+) following co-incubation with peptide-loaded targets. We have demonstrated that selecting highly functional CD4+ T-cell clones specific for tumour antigens from patients with clinical responses after immunotherapy treatment is a successful method for identifying highly functional HLA class II restricted TCRs for adoptive T-cell transfer. The use of these TCRs may have strong therapeutic potential not only in haematopoietic malignancies and in melanoma where tumour cells often express HLA class II but also in general through recognition of antigens cross-presented by tumour infiltrating APCs. In addition, combining the redirection of T cells with both HLA class I- and class II-restricted TCRs may further enhance the therapeutic effect in adoptive T cell therapy. We are presently developing in vivo models to validate these TCRs and evaluate the impact of CD4 TCR redirection in tumour eradication.

T cell-based therapy has generated remarkable remissions in hard-to-beat cancers and represents a large part of innovations in immunotherapy. Adoptive T-cell transfer (ACT) is a labour intensive method in terms of logistics and mainly depends on the quality of the patient’s T cells. We have developed a universal cell line for TCR expression by modifying the FDA-approved NK cell line, NK-92. One of the advantages of this cell line lies in the fact that it has retained its killing capacity and can easily be manipulated. However, tumour cell recognition by NK-92 is not specific. This can be overcome by introducing an antigen receptor, such as a CAR or, as in the current work, a TCR. We herein present evidence that NK-92 can be modified to become a T cell-like lymphocyte. This is a perfect combination of the inherent killing activity of the NK cells and the specific targeting of cancer antigens through TCR. We named this novel cell line UK-92, for Universal Killer derived from NK-92, and show that UK-92 expressing a TCR conserved the binding capacity to cognate pMHC. We also used phosphoflow cytometry to verify that the TCR-dependent signalling could happen in a NK cell line. Our data show that both early and late TCR signalling players were activated in TCR-specific manner (anti-CD3/anti-CD28 stimulation) and further in a pMHC specific manner upon specific TCR binding. Finally we performed functional assays using both TCR isolated from CD8 and CD4 T cells and demonstrated that NK-92 could be stimulated in a pMHC-specific manner. We have now shown in vitro that UK-92 are as specific and potent as redirected T cells to destroy target cells. We can anticipate that this technology, if proven efficient in vivo, will speed up ACT and reduce its cost. In addition it bypasses other challenges resulting from patient T cells that will be here discussed.

For many years the focus of cancer immunotherapy was on stimulating the activity of CD8+ lymphocytes to harvest their cytotoxic capacities. However, it has become more evident that a two-dimensional T cell response, involving CD4+ T cells as well as CD8+ T cells is necessary for more long-lasting and efficient tumour eradication. We have previously showed that CLIP-modified Invariant chain (Ii) can load MHC class I molecules (MHC-I) with antigenic peptides. We now show that expanding the CLIP modified region of Ii to cover a larger region of the antigen allows simultaneous MHC-I and MHC class II (MHC-II) loading and consequently CD8+ and CD4+ T cell activation. The antigenic focus of our study is a public neoantigen created by a frame-shift mutation in the TGFBRII gene. This mutation is observed in over 70% of colorectal cancer patients with microsatellite instability, making it a therapeutically relevant target.  Through a series of comparative studies we have identified an optimal TGFBRII insert: comprising 23 amino acids from the frameshift mutation. Expression of the selected Ii-TGFBRII construct in target cells by mRNA electroporation provided strong activation of CD8+ and CD4+ T cells in one shot. Furthermore, the Ii-TGFBRII construct was able to load MHC-I in proteasome deficient T2 cells, suggesting a direct loading in the endoplasmic reticulum (ER). Our results identify the CLIP region of Ii as an ideal vehicle for cancer vaccination, likely leading to an anti-tumour immune response that is co-orchestrated by both CD4+ and CD8+ T cells.

Adoptive T-cell therapy using chimeric antigen receptor (CAR) has given impressive clinical results in hard to cure haematological cancers. CAR-modified T cells targeting the CD19 antigen have shown cure rates of 90% in acute lymphatic leukemia. The identification of new targets on B cells represents a novel strategy for therapy of B-cell malignancies. We have a large collection of hybridomas, each producing monoclonal antibodies, and an antibody phage library which could be cloned into a CAR scaffold. Some of these antibodies have already been used in clinical trials, but never tested as CARs. We therefore aim at designing CARs targeted against unexploited B-cell antigens. Identification and validation of new targets will lead to the development of novel CARs for the in treatment of additional haematological malignancies. CD37 is highly expressed on malignant B cells in non-Hodgkin lymphoma (NHL) and chronic lymphocytic leukemia. It is also expressed in hairy cell leukemia and lymphoplasmacytic lymphoma. We have developed a novel CAR targeting the CD37 antigen, which represents a promising therapeutic target for B-cell malignancies. In vitro validation of our anti-CD19 and anti-CD37 CARs (in the third generation format) was performed, including comparison to a clinical anti-CD19 CAR (FMC63), with promising results. CD19 and CD37 are expressed on a similar spectrum of malignancies, and our findings suggest that CD37-redirected CAR T cells could be used as an alternative to or in combination with CD19-directed therapies.