In the March 25th issue of Science (journal impact factor 29.75), Camilla Raiborg and Harald Stenmark at the Centre for Cancer Biomedicine and Institute for Cancer Research are contributing a Perspective article that covers recent developments in our understanding of the molecular dynamics of the final stage of cell division - cytokinesis.

As described previously by the authors in Nature, the endosomal sorting complex for transport (ESCRT) machinery mediates sorting of ubiquitinated membrane proteins into the intraluminal vesicles of multivesicular endosomes. The ESCRT machinery consists of four complexes called ESCRT-0, -I, -II and -III. ESCRT-0 recognizes and sequesters ubiquitinated cargo, ESCRT-I and -II form invaginations of the endosomal membrane and sort cargo therein, and ESCRT-III mediates the abscission of the intraluminal vesicle from the limiting membrane of the endsosome. Recent studies have suggested that ESCRT proteins are involved in cell division as well, namely in the final abscission step of cytokinesis, which results in complete separation of the two daugther cells. In the March 25th issue of Science, Daniel Gerlich´s group shows evidence that a protein helix composed of ESCRT-III subunits constitutes a spring that accomplishes membrane scission during cytokinesis. The group also finds that the ATPase Spastin localizes to the end of the ESCRT-III helix to mediate microtubule severing. The new data thus identify a molecular mechanism that explains membrane and microtubule severing during cytokinesis. 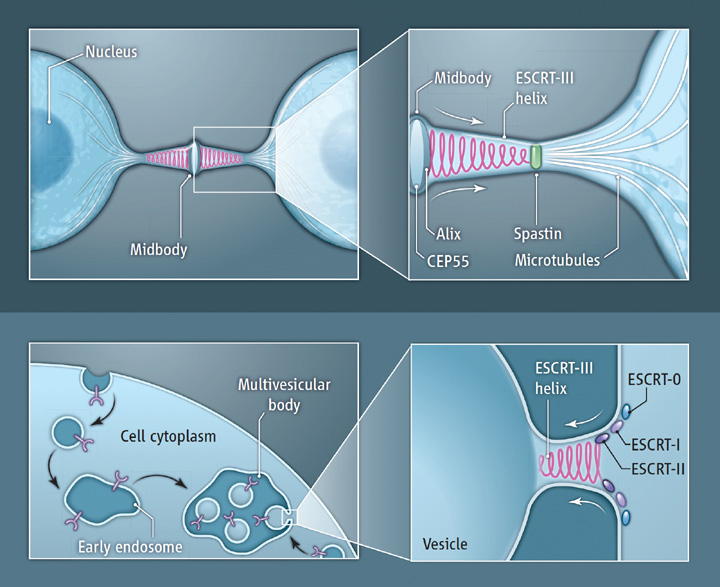 (Top) Daughter cells that arise from cell division are separated by a thin membrane bridge that contains microtubule bundles. A helical filament, probably consisting of ESCRT III polymers, spans the bridge. Spastin is recruited to the narrowest part of the microtubule bundle (the constriction zone) to sever it. This causes the helix to constrict, which leads to membrane abscission at the same site.
(Bottom) The budding of intraluminal vesicles into multivesicular endosomes is a topologically equivalent membrane abscission process to cell division. It is thought that a helical filament of ESCRT III is involved in this process as well.