Our research team is generally interested in understanding molecular processes during normal and malignant hematopoiesis. Hematopoiesis describes the formation of all blood cells throughout life. This is ensured by long-term repopulating hematopoietic stem cells (HSC) that give rise to HSC and progenitors with limited renewing capacity. These progenitors produce lineage specific daughter cells that in turn form terminally differentiated erythroid/myeloid and lymphoid cell types. HSC division and blood cell differentiation is tightly regulated by genetics and epigenetic events as well as activation of specific signaling pathways. The dysregulation of one or more of these biological processes can lead to various blood disorders such as leukemia. 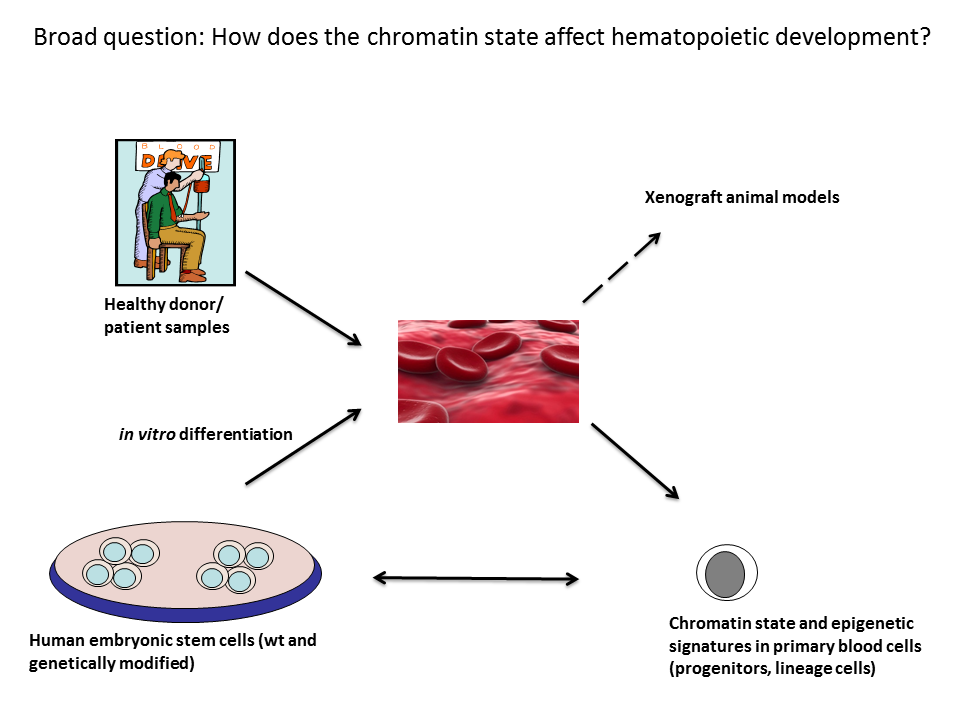 Figure 1: Overview of general approaches and methodologies used in my group. The broad research aim of my group is to identify key molecular processes that govern hematopoietic specification, hematopoietic stem cell renewal and differentiation, and differentiation of blood progenitors into mature blood cells. We are using primary patient samples, patient-derived iPSC, genetically modified hESC lines encoding reporter genes to monitor mesoderm and blood differentiation as well as in vivo zebrafish and mouse models.

Research in the Staerk group aims to decipher molecular processes that govern normal and malignant hematopoiesis and focuses on: i) identifying epigenetic and genetic events and signaling pathways that are crucial for human blood development, ii) deciphering the mechanisms by which the nuclear lamina influences hematopoietic development, and iii) identify underlying molecular causes of myeloid blood disorders triggered by defects in lineage differentiation that we study in the physiologic setting. To achieve these goals, we are using human pluripotent stem cells, in vitro differentiation assays as well as animal models along with primary patient samples and we combine these assays with genetic and genomic approaches. Insight obtained from our research projects will help to identify factors needed for efficient blood cell differentiation, and how this differentiation is affected in disease. Further, it will help to identify factors needed to expand functional HSC isolated from bone marrow (BM), and to derive functional HSC from pluripotent stem cells in vitro.

One main focus of my group is to understand how epigenetic signatures influence cell fate determination during mesoderm and hematopoietic cell specification. DNA methylation is an epigenetic modification which is key to numerous processes including regulation of gene expression and maintaining genomic integrity. Additional complexity to the overall gene regulation has been added by the discovery of Ten-Eleven-Translocation (TET) enzymes, which are dioxygenases that catalyze the conversion of 5-methylcytosine (5mC) to 5-hydroxymethylcytosine (5hmC). The general importance of 5mC and 5hmC during development has been documented in animal models. Recently, we characterized 5hmC distribution in CD34+ cells and mature blood lineage cells and showed that in CD34+ cells, 5hmC primes expression of genes that regulate myeloid and lymphoid lineage commitment. Throughout blood cell differentiation, intragenic 5hmC is maintained at genes that are highly expressed and required for acquisition of the mature blood cell phenotype. Moreover, in CD34+ cells, 5hmC at enhancers was associated with increased binding of RUNX1 and FLI1 that are TFs crucial for hematopoiesis. To further investigate the role of 5mC and 5hmC during human blood cell differentiation, we now established oxidative bisulfite sequencing and deleted endogenous DNMT3A and 3B or different TET family members in hESC lines encoding reporter genes that allow monitoring blood cell differentiation. We aim to decipher how epigenetic changes and transcriptional networks interact during blood cell formation, and how 5mC as well as 5hmC influence the recruitment of key TFs during human hematopoiesis. Critical to this question is how epigenetic modifiers such as DNMT and TET enzymes interact with non-coding-RNAs (nc-RNAs) and which nc-RNA networks are required to generate mesoderm and hematopoietic progenitor cells from hESC.

Role of the nuclear lamina during human hematopoiesis

More recently, the group developed an interest in the nuclear lamina (NL)/lamin proteins. Lamins are divided into A-type lamins that are expressed in most somatic cell types, but are not expressed in stem cells, while B-type lamins (LMNB1 and LMNB2) are highly expressed in both, stem cells and differentiated cell types. Apart from the well-established role in forming a scaffold underneath the inner nuclear membrane, the NL has been implicated in nuclear positioning of chromatin and transcriptional regulation, which is thought to be critical for cell fate decisions. We aim to address how lamin-mediated gene regulation influences human hematopoiesis, and whether lamin proteins are dysregulated in blood disorders. Lamin proteins tether chromatin to the NE and influence transcription, signaling networks and cell fate decisions. Deciphering lamin-mediated gene regulation during blood cell specification will increase our understanding of underlying regulatory mechanisms during blood cell differentiation in the physiologic setting and will help to elucidate whether these processes are affected in disease.