The Inven2 Prize is an annual award to take business ideas based on research results originating from UiO, OUS or Health Region South-East further. This year 75 ideas and inventions competed for the Idea Prize. The awards were distributed during the "Gründer Day" on October 18th.

Jorrit Enserink, leader of the yeast cell group at the Department of Microbiology at OUS won the third prize for the idea "New screening method for cancer drugs".

Inven2 is the tech transfer office at Oslo University Hospital, University of Oslo and South-Eastern Norway Regional Health Authority and the largest such office in Norway.

Article about the Idea Prize 2012 (from the inven2 home page, in Norwegian) 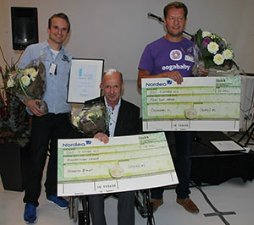