At the 61st Lindau Meeting of Nobel Laureates, 23 Nobel Laureates from the fields of physiology or medicine and chemistry met 566 Young Scientists from 78 countries. Almost 190 academies of science, research institutions and universities from around the world nominated the up-and-coming scientists, with the number of initial applications by Young Researchers reaching over 20,000. The meeting report has recently been published.
Ivan Potapenko - currently following the Medical Student Research Program (MSR) at the University of Oslo, working on the project "Anti-glycan autoantibody signatures of breast cancer; possible role in early diagnosis and malignancy status evaluation" with Anne-Lise Børresen-Dale's group at the Institute for Cancer Research - is one of the few young scientists to be presented in the meeting report, as well as having his picture on the front page.

The 61st Meeting of Nobel Laureates was dedicated to Physiology or Medicine and took place from June 26th to July 1st, 2011 at Lindau/Germany. 23 Nobel Laureates and 566 young researchers from 77 countries attended this unique forum.

The Lindau Meetings, and the underlying idea of creating a platform to facilitate encounters between Nobel Laureates and the world's best young scientists of tomorrow, enjoy widespread support. More than 220 Nobel Laureates are member of the Founders Assembly of the Foundation and demonstrate  through their membership and their participation in the Lindau Dialogue their support for the principle of the Lindau Nobel Laureate Meetings.

Approximately 500 to 600 Young Scientists are invited to participate in each Nobel Laureate Meeting. They are selected by the review panel of the Council in cooperation with nearly 190 Academic Partners in an international selection process involving academies of science, ministries, foundations as well as top-ranking research institutions and universities from around the world. Students, PhD students and Postdocs who have distinguished themselves through outstanding achievements in their fields are eligible to apply for participation, at the recommendation of internationally recognised scientific institutions.

As the first step, Young Scientists submit their application to one of these partners. Based on the selection criteria formulated by the Council for each meeting, the Academic Partners carry out a preliminary evaluation, which is then forwarded to the review panel of the Council. Initially, more than 20,000 Young Scientists apply to attend each Lindau Meeting. With the help of the Academic Partners, this number is narrowed down to around 2,000 applicants, and these are submitted to the review panel.

Based on scientific publications, tutorial experience, university grades, recommendations by professors and personal letters of motivation, the members of the review panel select roughly 550 of the most talented applicants to attend the Lindau Meeting. Chairmen of the Councils review panel for the 2011 Lindau Meeting were Professors Hans Jörnvall and Helmut Sies. They were assisted by Nadine Gärber and Julia Schürer in the Executive Secretariat, and also by Andreas Schmidt and Alexandra Wimbauer.

566 Young Researchers from around the world were selected to participate in the 61st Lindau Meeting. All engaged in the field of physiology or medicine or related disciplines, they can be grouped as undergraduate students, masters and doctoral students, and young postdoctoral scientists.

The following standards and criteria serve to select participants from among all applicants. Participants shall

The presentation of Potapenko from the meeting report:

Focus: Global Health
With participants from 78 countries, this years Lindau Meeting of Nobel Laureates was more international than ever. Many of the Young Scientists came from developing countries where disease is rifeall the more reason, then, to link the meeting for the first time with the theme of Global Health. From the opening with a panel discussion on this topic to a range of lectures by Nobel Laureates and a final panel discussion on Mainau Islandglobal health was one of the central themes of the 61st Meeting of Nobel Laureates.

Panel at the Opening Ceremony
The stellar panel discussion at the opening ceremony included William H. Gates III, the founder of Microsoft and co-founder of the Bill & Melinda Gates Foundation, Nobel Laureate Ada E. Yonath, who won the 2009 Nobel Prize in Chemistry for her groundbreaking crystallography work revealing the structure and function of the ribosome, and two bright Young Researchers, Sandra Chishimba, a malaria researcher from Zambia, and Jonathan Carlson, who is researching HIV/AIDS at Microsoft Research.
William H. Gates III urged Young Researchers to consider the needs of the poorest people in the world in their work. Threats to global health include HIV/AIDS and malaria, but William H. Gates III said that people in low-income countries do not have their medical needs met by their governments or companies. To put this into perspective, he told the audience that ten times more funding is focused on finding a cure for male baldness than on finding a cure for malaria, which kills 850,000 people a year.

Links to various vidoes recorded during the meeting

Hungry for Knowledge, with Oliver Smithies:
An early-career scientist met with a Nobel laureate to discuss the choice between doing research or becoming a physician 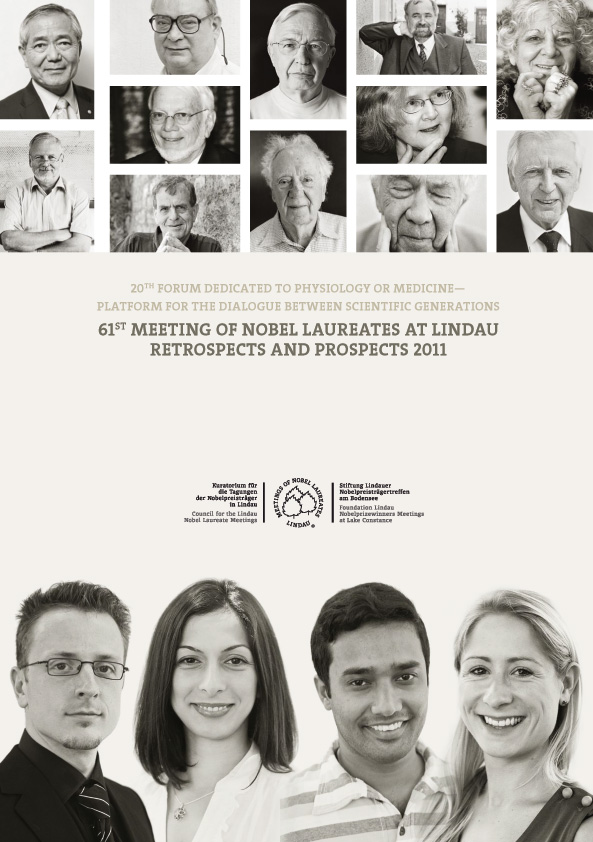