It has become accepted that tumors function as an ecosystem, where cancer cells co-operate with various factors of the microenvironment (stroma cells, extracellular matrix and soluble mediators) to assure disease progression and treatment resistance.

The project group of Lina Prasmickaite focuses on understanding how cancer cells exploit the microenvironment factors to promote therapeutic resistance in malignant melanoma and breast cancer. We aim to uncover biological mechanisms involved in such interaction, and thereby, reveal candidate targets for therapeutic intervention with the overall goal to overcome resistance. 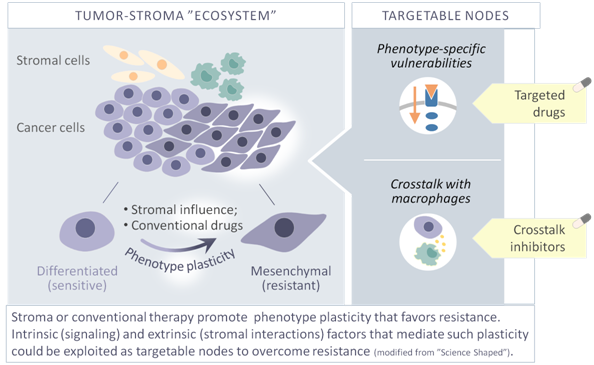 We have demonstrated previously that melanoma cells, being in contact with fibroblasts, lose sensitivity to conventional therapy with MAPK pathway inhibitors, but gain sensitivity to PI3K/mTOR inhibitors (Seip et al., Oncotarget 2017, Cancer Letters 2018). This effect was associated with fibroblast-induced phenotypic switch in melanoma, which acquired the mesenchymal-like phenotype. Currently, we are investigating whether a similar stroma-facilitated phenotypic plasticity could be involved in chemoresistance in breast cancer. With this in mind, we aim to identify phenotype-specific therapeutic vulnerabilities and design phenotype-directed combination therapies to improve the treatment of resistant tumors. These studies constitute a part of the TheraMetBC project.

Tumor-associated macrophages (TAMs) are among the most abundant immune cells in the microenvironment and have been linked to poor outcome. Previously we have shown an association between the transition to the mesenchymal phenotype and enrichment for cytokines as well as pro-tumorigenic macrophages in malignant melanoma and breast cancer (Bettum et al., Cancer Letters 2014 and 2016; Prasmickaite, Tenstad et al., Molec. Oncol. 2018). Currently, we are studying how such communication is executed in chemoresistant versus chemosensitive breast cancer, with special emphasis on the secretome. The project is a part of the H2020 Marie Skladowska-Curie Innovative Training Network “SECRET”