Welcome to the Quantum Dots group!

What is Nanotechnology?
It refers to interactions of cellular and molecular components with engineered materials  typically clusters of atoms, molecules, and molecular fragments. An engineered particle can be defined as "nanoparticle" when its at least one dimension is less than 100 nm and it possesses more than one functional property.
By choosing proper material and synthesis conditions a nanoparticle with desired characteristics can be produced. Nanoparticles can be synthesized from carbon, metals, semiconductors, polymers, phospholipids, etc. Coating with certain terminal group allows further conjugation with many traditional drugs and targeting units. Possibility to use such a large variety of materials together with functionalization of the nanoparticles has led to vast expansion of this multidisciplinary field world-wide. The term Nanotechnology now covers a very wide range of societal applications.

What is a Quantum dot (QD)?
In a bulk semiconductor material electrons mainly occupy a valence band with very few in a higher state conduction band. Energy input (e.g. photon absorption) may promote electrons to the higher state. Transition of the electrons back to the valence band is usually a radiative process known as luminescence (emission of photons with energy nearly equal that of the bandgap, a characteristic value of semiconductor). When particle size becomes of the order of Bohr radius, the energy levels are no longer continuous and become descrete. This is known as the quantum confinement effect. Such minuscule semiconductor nanoparticles are called quantum dots; They have quantized electronic energies just like atoms and organic fluorophores. The term artificial atoms is commonly used to describe quantum dots. However, unlike traditional fluorophores, energy levels of quantum dots can be relatively easily tuned by changing their size and chemical composition, adding doping atoms and coating. Thus, quantum dots are immerging as novel materials for imaging as well for photodynamic therapy and radiation therapy of cancer.

Project goals
Main aim of our NanoMedLab is to develop a sensodot (sensitizing quantum dot), which acts as a photosensitizer and radiosensitizer in cancer cells under stimulus with electromagnetic radiation (visible or ionising). Such sensodots will enhance effectiveness of radiation therapy, and will lower radiation doses delivered to a patient. In spite of huge enthusiasm in the field, assessment of cytotoxic and health effects of the nanoparticles is also a key issue.

Ultimate goal of nanotechnology is to develop a nanomedicine, which is a multifunctional nanoparticle possessing four functional units: 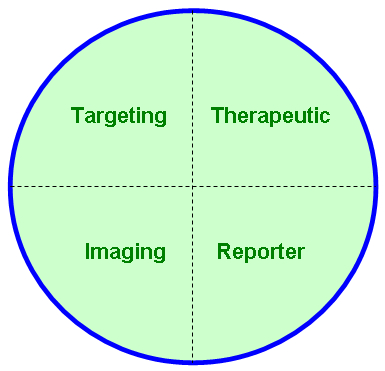